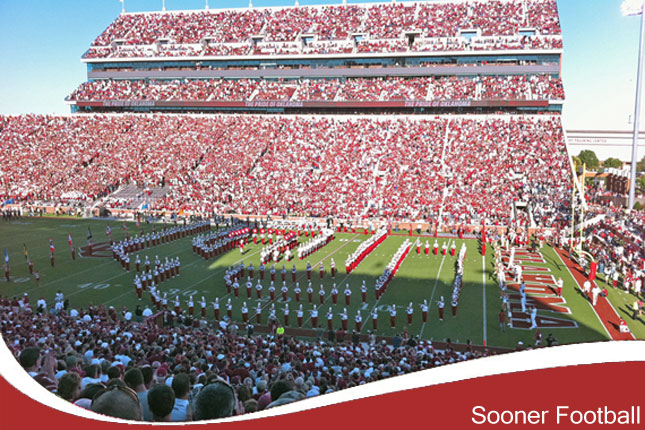 In 1870, the United States Land Office contracted with a professional engineer to survey much of Oklahoma territory. Abner E. Norman, a young surveyor, became chairman of the central survey area in Indian Territory. The surveyor’s crew burned the words “NORMAN’S CAMP” into an elm tree near a watering hole to taunt their younger supervisor. When the “SOONERS” (those who headed west before the official Land Run date, April 22, 1889) and the other settlers arrived in the heart of Oklahoma, they kept the name “NORMAN.” Today, with an estimated 120,866 residents, Norman is the third largest city in the State of Oklahoma.

Norman was primarily developed around the Santa Fe Railroad. Home to a passenger depot as well as a freight station, Norman became the headquarters for the railway. As business grew, it was necessary to expand the depot three times in the first few years of its existence. The last expansion was announced by J.E. Hurley, General Manager of the Santa Fe Railway, in 1909. The Santa Fe Depot was deeded to the City in 1972 and has had major renovations over the past ten years.

The City of Norman has agreed to preserve the Santa Fe Depot as a historical landmark and use the building in a manner as to benefit the entire community. It is a popular rental facility for meetings, banquets, and parties, and provides daily Amtrak passenger service.

The railroad laid the foundation for Norman to flourish into a prominent city. While other Oklahoma towns were battling to be the capitol, Norman’s Mayor, T.R. Waggoner, directed a bill through the Territorial Legislature to become home of the state’s first institution of higher learning. In 1890, Norman was chosen as the location for the University of Oklahoma (OU), contingent upon the county passing bonds to construct a building. Town and country residents were also required to donate 40 acres of land for a campus site. The residents of Norman were successful in all their plans to be OU’s home and by 1895, the university enrolled 100 students. Today, the Norman campus has an enrollment of approximately 22,000.

Today, OU and the City of Norman are still making history. Norman was recently recognized as one of the most progressive cities in the state and the Norman Public School system was acknowledged as the top school system in Oklahoma. Currently, Norman is involved in a downtown revitalization project as well as a project that will guide Norman and its citizens into the 21st century. The Norman 2020 plan was designed to address future population growth and infrastructure problems and offer solutions to solve these problems before they occur.

Norman’s rich history plays an important role in citizen’s lives and we continually make our history book more exciting with each passing year.